Bret’s short story “Half of What Atlee Rouse Knows About Horses” has won the 2017 Sunday Times EFG Short Story Award!  The prize is the “world’s richest and most prestigious award for a single short story.”

Judge Mark Lawson: “Great short stories achieve a breadth of meaning far greater than the length of their telling. In Bret Anthony Johnston’s story, a small patch of Texas cattle country opens up long vistas on love, death, memory and the survival instinct, human and equine.  Johnston showed brilliance over the long distance in his novel, Remember Me Like This, and now proves equally adept at brevity. Small details from American and animal lives take on vast significance, and every line has the kick of a horse.”

Sunday Times literary editor Andrew Holgate, who also judged the award, said: “We began the 2017 Sunday Times EFG Short Story Award with over 1,000 entries from five continents, a record for the prize. The shortlist was an immensely strong one, but Bret Antony Johnston’s story stood out for the poise, beauty and calm of its writing, the depth of its emotional engagement, and for its deep, deep resonance and humanity. The Sunday Times EFG award has an excellent reputation both for rewarding major writers, and introducing exciting new ones. Bret is already weighed down with accolades in the US, but I’m very excited that British readers can now be introduced properly to this outstanding author.”

To read the story, which was originally published in American Short Fiction, click here.

It’s official: Remember Me Like This is an international bestseller!  Gratzi, Italia! 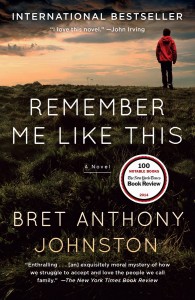 The Writer’s Center has chosen Remember Me Like This as the winner of the 2015 McLaughlin-Esstman-Stearns Prize!

The paperback for Remember Me Like This is now available! 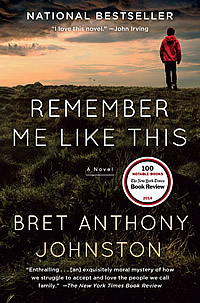 It’s official: Remember Me Like This is a national bestseller!

Sincere thanks to all of the readers and booksellers who made this happen!

In a full page rave review in this Sunday’s New York Times Book Review, novelist Eleanor Henderson called Remember Me Like This “enthralling” and “gorgeous,” and she argued that the novel sets a standard for authors.  Here’s an excerpt:

“What Johnston captures and examines so expertly isn’t the kind of sadistic cruelty familiar to anyone with a television, but a subtler, more quietly menacing variety, the eggshell tiptoeing, the killing kindness we unknowingly inflict when acting out of love and fear…. Johnston’s characters are so fully realized, each of their mistakes so loaded with “the coded systems of loving and being loved,” that by the time they begin to consider any truly criminal action, we’ve already forgiven them…“Remember Me Like This” isn’t a novel about a kidnapping. It’s not a psychological study of Stockholm syndrome or a victimology. It’s not a thriller, and it’s not even really a mystery, unless it’s an unsolved one, the exquisitely moral mystery of how we struggle to accept and love the people we call family, even when we can’t fully know them.”

To read the full review,click here.

Arun Roth did a great interview with Bret on NPR’s Weekend All Things Considered!

The novel also received a rave review in the Globe from Emily Rapp!  She described the book as:

“Extraordinary… An achingly beautiful and psychologically insightful portrait of a family rebuilding after a traumatic event…  So devastating yet utterly surprising that only a novelist of tremendous skill could manage it… Johnston is a terrific stylist who wields lyrical language in a way that makes it seem natural and unforced … A lesser novelist might have treated such charged material with prurient interest and ripped-from-the-headlines drama instead of as a tender and compelling portrait of recovery… Exquisite… Luminous… What does rebuilding look like for individuals and for small towns in which each person is important and missed when they are gone? Johnston tackles these issues with empathy and tact, rendering the many faces of loss with acute observational skill. Readers will be surprised and moved by this novel in which being found is only the beginning of the story. This is a stroke of artistic genius…”

The early reviews have been amazing, and now Bret’s new novel, Remember Me Like This, is available everywhere–in hardback, eBook, and audiobook!  Here’s a sample of the incredible buzz that sent the novel into a second printing even before its release!

“I know the novel you’re looking for. It’s the thriller that also has interesting sentences. It’s the one with the driving plot but fully realized characters as well, the one that flows like it was plotted by Dennis Lehane but feels like it was written by Jonathan Franzen. . . . Fortunately, there’s Bret Anthony Johnston’s Remember Me Like This. . . . The book is riveting, with the elements of suspense neatly folded into an elegant series of interlocking arcs. . . . There is nowhere you want to stop.”—Esquire

“Tremendously moving… there’s real humanity in Johnston’s writing, and it’s heartening to spend time with these folks as they relearn how to be a family. Rendered in these compassionate, candid chapters, theirs is a struggle that speaks to those of us who have endured far less.” –Ron Charles, The Washington Post

“A remarkable debut novel. Johnston incites the reader’s urgent need for answers, satisfied in a surprising way that makes Remember Me Like This virtually unputdownable.” –Kirkus

Wonderful, thrilling news!  Barnes and Noble has chosen REMEMBER ME LIKE THIS for its Discover Great New Writers program!  The novel is a Summer 2014 selection and goes on sale May 13, 2014.  Stay tuned for more details on the Discover program.